Growing up my parents owned a restaurant. When we were young and the restaurant was closed, my sisters and I would walk through looking for money that customers had dropped on the floor. There was always a plethora of quarters and dollar bills under tables. (We later found out that our father would walk around tossing money on the floor before we came in to look. R.I.P. Pops!) We’d collect our found treasure and then empty all the money out of the jukebox, put back in a few quarters, play music and dance with the tables pushed back and chairs out of the way.

I loved those times. It was fun and at that age, a few dollar bills seemed like a lot of money. But alas, we all grew up and began working in the restaurant, and I saw firsthand the level of effort that went into running it all. I was a kid and didn’t want to work or deal with the frenetic energy of the restaurant. During a shift on a busy Friday night in middle school, while angry that I wasn’t at the mall wearing Guess jeans and bad blue eye shadow with the rest of my friends, I promised myself I would never own a business! “Too much responsibility! You can never get away from it all,” I said. Oh, the irony! But, since I don’t own “a business,” I own a few, maybe I kept that promise to myself??? (HAHAHA!!! Feel free to laugh at me. I know I do.)

But back to those young, carefree days –

One of my favorite songs on the jukebox was The Gambler by Kenny Rogers. I could belt out all the words. The chorus went like this,

Little did I know how often this tune would come to mind during my first few years in business for myself. Representing yourself, with no one to fall back on is tough, and I sang the song in my head while sitting in a conference room, negotiating a contract. The relevance and application in the situation made me giggle. I leaned into the discussion and listened intently, observed behavior and did my best to read the room. I quickly learned the one that spoke the most, was not the decision maker. The dude that wrote a few notes and walked out of the room was speaking to whom outside???? I wondered. I listened and watched some more.

There was the guy that loved to hear himself talk, a woman on the other side who also appeared to be observing. The guy that talked too much was getting on her nerves, I could tell.  She looked down at her watch. The dude with the notes came back into the room. I believe in my silence, some at the table thought I had nothing to say. They were wrong. I was following the advice in The Gambler and listening, holding my hand, deciding whether I wanted to show my cards, or simply fold and run. 😉 Cue Kenny . . .

Another gem from the song is the line: “You never count your money when you’re sittin at the table, there’ll be time enough for countin’ when the dealin’s done.”

Always remember that nothing is set in stone until you have it in writing, so don’t get ahead of yourself. If you sit in a negotiation with money signs flashing in your eyes every time you think something’s going your way, you’ll miss vital statements, signs and cues that you must pay attention to in order to get the best deal for your company. And another thing, I once made the mistake of believing someone’s words before they were in writing and it cost my business a great deal. That was the “green me” in the early days, when my mind was racing and working faster than real time results. That’s not me anymore. During negotiations, I now pay closer attention to the words “time enough for countin’ when the dealin’s done” and it reminds me to rely on nothing until the contract is signed, sealed and delivered.

It has been said a million different ways that you should never underestimate the power of listening. I’m sure you’ve heard, “Listen 80% and speak 20%.” Or, “You have two ears and one mouth for a reason and should listen twice as much as you speak.” This is basically what the song is saying – know when to listen and know when to speak. In negotiations, a deal can quickly go south with too many comments, concessions or assumptions. It’s in those times, we must challenge ourselves to listen more than we speak. Try this and see if it changes things for you. 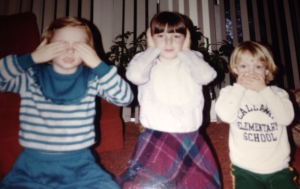 While I’ve got music on the brain, anyone remember the song Slow Hand by The Pointer Sisters? That was another jukebox favorite and it went like this. . . I’ll admit, I’m pretty creeped out when I think of my younger self singing the lyrics to that song. But doesn’t that just define the 80’s, when kids could still be blissfully unaware?

It was a great time to be a kid before the internet, social media or camera phones – I wish I still had that jukebox!